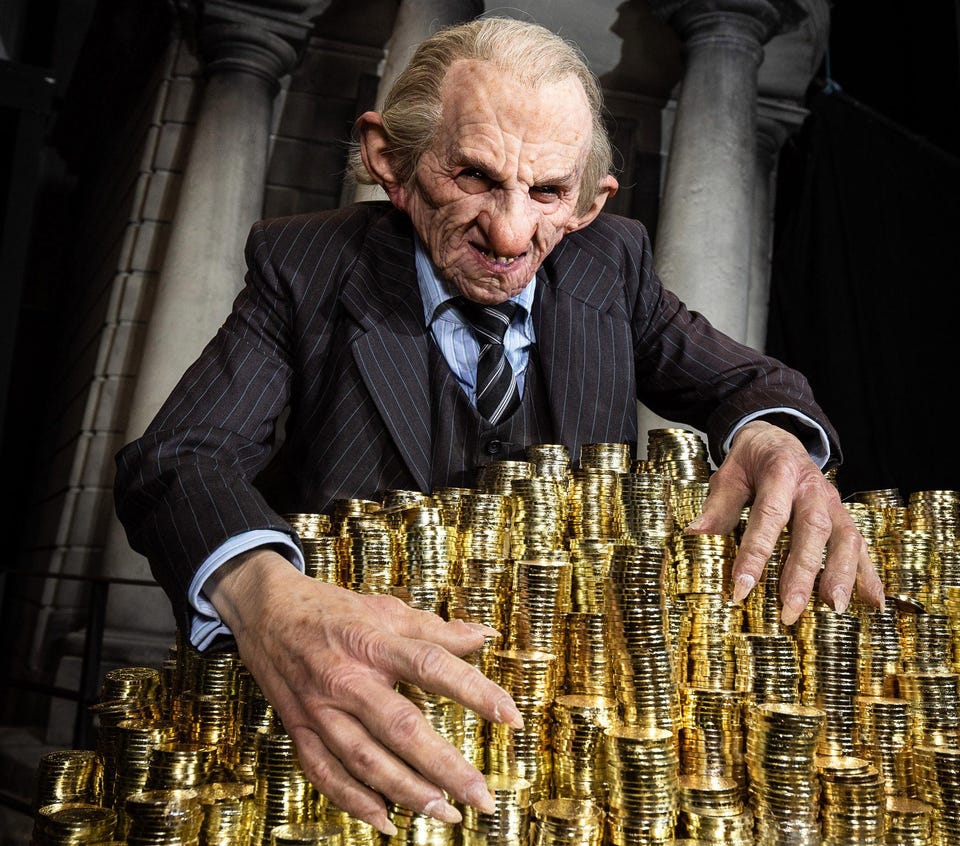 But there are other examples, such as assorted Disney villains, vampire tales, and more. Two lines of arguments frequently revolve around European folklore, which is (obviously) a special interest of mine:

So, how much truth is there to these arguments? I cannot decisively answer them – I lack the breadth of expertise for that – but I can examine them from my limited perspective, which is someone who has read a lot of German local legends and folk tales. I can say less about longer German fairy tales (a separate but related genre), or about folk tales from outside of Germany, and I hope that scholars of these tales can share their own thoughts on this matter.

First, it must be said that even with a cursory reading of German folk tales it is readily apparent that antisemitism is rampant in many tales. Jews are frequently slandered in extremely vile ways. But that, in itself, does not yield information about the prevalence and nature of “Jew-coding”. Thus, my approach is to take a look at the main types of negative portrayals of Jews in German folk tales (and it must be said that most portrayals of Jews in German folk tales were negative), and see if there is any narrative overlap with tales about supernatural creatures. If the same tropes occur in tales about Jews and tales about supernatural creatures, then there is an argument to be made that these creatures could be considered to be narrative proxies for Jews.

Blessed altar bread, in Christianity, represents the body of Jesus Christ through the miracle of Transubstantiation, and thus is one of the most holy symbols of the faith. Jews were often portrayed as being eager to disrespect or even defile such bread in folk tales, and such slanders have been the trigger for many pogroms.

I have not come across any tales about supernatural creatures trying to defile altar bread. However, defiling altar bread is a common narrative trope of all sorts of tales about “black magic”. The most famous of these are the “Freischütz” legends where a hunter becomes an infallible marksman by shooting at a piece of blessed altar bread, but I have come across no tales where a Jew is portrayed as a hunter.

The only instance of a supernatural creature desiring altar bread I have come across is of a ghost who desires it not in order to desecrate it, but in order to attain salvation via its “all-reconciling” properties.

In summary, I conclude that “Jew-coding” did not occur for the trope of host desecration. Host desecration is not a unique element to tales featuring Jews, but most other tales are focused on using altar bread for magical purposes. In Jew-centered tales of this nature, the alleged hatred of Jews for Christian holy symbols tends to be the most important element instead.

Another common trigger for pogroms, Jews were frequently accused of poisoning wells. I have come across no tales of supernatural creatures engaging in this activity. While witches were also sometimes portrayed as seeking to do harm on a large scale, this usually took the form of supernatural curses.

The third of the slanders that were used as an excuse for pogroms, “blood libel” was the claim that Jews abducted Christian children and sacrificed them as part of allegedly religious rituals – an earlier predecessor to the modern “Satanic Panics” such as the Pizzagate conspiracy fantasy, although similar accusations were levied against Christians during the Roman empire.

While supernatural creatures in German folk tales sometimes do abduct children, the goal is rarely murder, much less ritual murder. Most common are the “changeling” tales where an infant is replaced by a double, such as a dwarf or a nixie (a water spirit). My take is that these tales are more of a metaphor for ableism rather than antisemitism – the child is not as “normal” as the mother expected, and thus she wishes for her “real” child back that does not have any of the “problematic” behavior of the “fake child”. Considering that a common approach to exposing the changeling is to become violent with it, the implications are quite horrific in their own right, but are not an obvious candidate for “Jew-coding”.

Nixies are known for ritualistic murder, however – in many legends, they seek an annual sacrifice on St. John’s Day (or Night) that they will drown. Some tales do have the nixie focus on children, but usually they are content to murder adults as well. Thus, the parallels to blood libel are also weak.

Examples of ritual murder by nixies:

Another type of antisemtic tale featured the mockery of Jewish customs and practices. In one tale, Jews rented the house of a knight for the Sukkot holiday, and the assorted locals then “pranked” the Jews by hiding a huge toad in their altar. In others, a Jew falls into the privy during the Sabbath, and then has to stay there until the next day because Jews (as the stories falsely claim) are forbidden to help him during that day.

I could discover no tales where supernatural creatures exhibit practices that echo Jewish religious practices, and thus no “Jew-coding” applies here, either.

Another type of folk tale featuring Jews as antagonists to Christianity is that of the “Wandering Jew”, about a Jew who allegedly either taunted Jesus on the way to his crucifixion or refused him succor. For this, he was cursed to roam Earth until Judgment Day.

There are certain parallels between this tale and variants of the “Wild Hunt” myth, where the leader of the Wild Hunt is cursed (or blessed) to roam the world forever because they said that they preferred the pleasures of the hunt to the pleasures of Heaven. However, while the “Wandering Jew” tales might have drawn some inspiration from Wild Hunt tales, Jews were rarely portrayed as hunters, and the leaders of the Wild Hunt were never portrayed as having interacted with Jesus (although they frequently were associated with the Devil).

Throughout much of German history, Jews were barred from most professions. Some of the few professions that were open to them were banking and moneylending. While these could be quite profitable, they could also be highly risky – not just because the debtors might be unable to pay, but also because influential creditors could use one of the slanders above to trigger a pogrom and thus get rid of the very people they owed money to. For these and other reasons, interest rates were quite high, which further made the moneylenders an unpopular yet necessary trade – but this unpopularity was a frequent excuse to portray Jews in general as “greedy”, willing to ignore morality in the pursuit of a profit.

In contrast, supernatural creatures in German folklore were almost never portrayed as being “greedy”. While some of them were quite wealthy, their narrative role was to dispense riches, not take them away. This could take different forms, from generous dwarven kings helping the needy to kobold and dragon familiars bringing money on a regular basis, but rarely were they interested in getting money from humans.

The only other group that would be regularly portrayed as “greedy” were the Venetians, who were presented as secretive foreigners with magical powers (and who might not be entirely human). But they rarely sought to harm individual people living in Germany in their acquisition of wealth – instead, they used magical methods to harvest gold, silver, and gemstones from the very mountains of Germany itself. Thus, there is once again very little thematic overlap with tales about Jews.

Examples of tales about “greedy Jews”:

Examples of tales about Venetians:

Based on my (still limited, but hopefully fairly representative) review of German folk tales, antisemitic tales were both vile and widespread. However, the practice of “Jew-coding” – using supernatural creatures as proxies for Jews by applying antisemitic stereotypes to them – seems to be absent. My assumption is that the storytellers who shared those tales felt free to slander Jews directly without any fear of social consequences, and thus did not perceive any needs for thinly-disguised proxies.

But let us return to the initial trigger for this article – the modern-day portrayal of goblins in the Harry Potter franchise (which includes not just the books, but movies, video games, and similar media as well). Their prominent features include:

All in all, the sheer amount of parallels to either antisemitic tropes or Jewish history in Europe is concerning, and the charge of “Jew-coding” should certainly be taking seriously.

Now, it could be that many of these elements actually have parallels to old British folklore about goblins. Since my knowledge of British folklore is far more limited than my knowledge about German folklore, I cannot rule this out. However, my current understanding is that “goblin” was a fairly generic “placeholder” term for “small, mischievous spirit”, similar to the German “kobold”. Thus, I find it doubtful that this portrayal is based on actual European folklore. If I can find no compelling evidence of “Jew-coding” supernatural creatures in German folklore, then what are the odds that British folklore is full of it?

Thus, my current working hypothesis is that this is a later addition. This does not mean that J. K. Rowling and the creative directors of the assorted Harry Potter media properties came up with all of it, though this shows a deplorable lack of sensitivity readers in my opinion. However, something changed when old folk tales were turned into fantastic literature starting with the 19th century (I suspect that the poem “Goblin Market” may have been one of the milestones). Illustrations, too, may have played a role – why are now goblin-like creatures portrayed so frequently portrayed with hook noses just like Jews are portrayed in anti-semitic caricatures?

This essay only represents my current thoughts on this topic. Due to time, necessity, and priorities, I will remain focused on reading further German folk tales. Undoubtedly, I will come across further antisemitic folk tales, and if there is any further insight to be derived of them, I will make note of it.

But other scholars might wish to tackle other aspects of this question, based on their expertise and research interests:

If you have any thoughts and insights on this subject, please drop me a line!